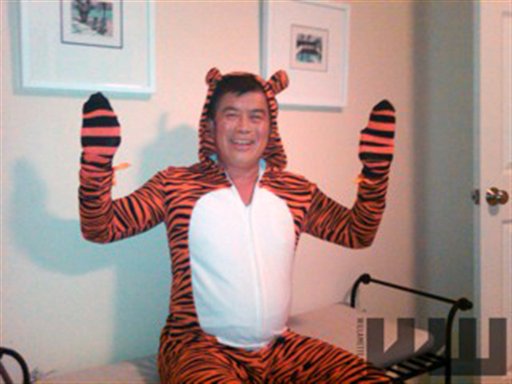 FILE – In this image provided by the Willamette Week newspaper, and taken Oct. 2, 2010 in Portland, Ore, U.S. Rep. David Wu is seen in a tiger costume. The Oregon congressman says that he accepted prescription drugs from a campaign contributor last October, around the time when members of his staff complained of his erratic behavior. On Tuesday, Feb. 22, 2011, Wu said on ABC’s “Good Morning America” that it was “unprofessional and inappropriate” for him to send pictures of himself wearing a tiger costume to staff members. Wu said the photos were taken while he was “joshing around” with his children in October just before Halloween. (AP Photo/Willamette Week) MANDATORY CREDIT